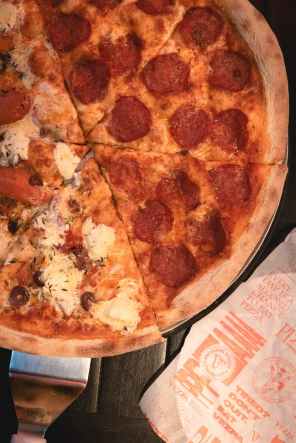 For the first time in a longtime I tried something new at work. It was something that yours truly had been working on for years at Fresh Foods but the opportunities weren’t presenting themselves. Nor was I willing to just take the “bull by the horns” and go for it.

I made some pizzas at work. To be honest the four pizzas produced recently weren’t the first ever made with my hands. Still yours truly feels as if I’ve made quite an accomplishment recently not even achieved during my time at the Hole.

The other pizzas ever made with my two hands occurred earlier during my time at the Hole and then later once I arrived at my current assignment. The only concern is would I be able to handle the rush during a “normal” business day as it could be very stressful for anyone who has worked pizza. Also at this moment my concern is over whether or not it’s possible to handle a custom order for a pizza. Regardless, it’s hard to say that I have an out as far as making pizzas now.

Keith – whom I formerly worked with at The Show – even chimed in on my snapchat that my beautifully crafted pieces of culinary artwork looked like something from The Show. The pizzas sold at my old job were shipped pre-made and frozen – definitely not freshly made not matter how often customers at concessions insisted on a “fresh” pizza. My only response to which he agreed was that the pizza I made was better than what you’d get at The Show. 😛

As always I continue to change and grow and learn new things!